Ubuntu Art Gallery is a contemporary art gallery based in Cairo, Egypt. It opened its doors in October 2014 and specializes in contemporary Egyptian artworks and secondary market modern Egyptian art. Its mission is to promote young emerging talent as well as artists with more established practices both regionally and internationally. The gallery derives its name from the Swahili word “ubuntu” which means “I am because we all are,” to connote a holistic concept of being. At Ubuntu Art Gallery, a belief in the interconnectedness of how Egyptian history and society influences Egyptian identity is at the core of the work being presented.

Ubuntu runs a program of two simultaneous monthly exhibitions, at its two-story headquarters in the neighborhood of Zamalek, so as to showcase work and introduce new artists frequently. It also exhibits at several satellite locations around the city – including the Swan Lake Clubhouse in the suburb of New Cairo, participates in several international art fairs and provides art consultancy services. As of late 2018, Ubuntu has also been hosting a series of monthly lectures – Ubuntu Dialogues – discussing a variety of topics surrounding culture and the arts.

The gallery is open daily from 11am to 8pm except Fridays.

Ramadan opening hours – daily  11am to 4pm except Fridays. 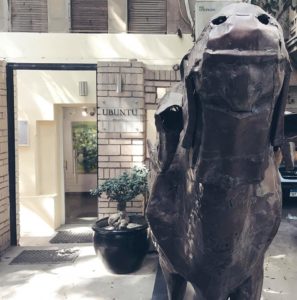